To address my main research question, I use genomics, transcriptomics, proteomics, and metabolomics to identify potential molecular mechanisms behind interactions in stable symbioses by identifying which genes/proteins/pathways are at the core of the interaction. These are then evaluated with functional genomics and placed into phylogenetic context, which allows me to determine how genes and pathways have evolved after being recruited to a new role. I am especially interested in interactions centered around ecological shifts in host usage, such as expanding or contracting host ranges or novel host adaptations (e.g. galling, ecto- to endo-parasitoid, blood to nectar feeding). These shifts have independently occurred multiple times throughout the tree of life and by placing them in an evolutionary context, the mechanisms behind these drastic changes and novel adaptions can be identified at the genetic level.
Venom evolution in parasitoid wasps
, I focused on the evolution of venom in parasitoid wasps. Parasitoid wasps are diverse and ecologically important insects that use venom to modify their host’s metabolism for the development of their offspring. Such modifications include developmental arrest, selective cell apoptosis, and immune suppression. The model parasitoid wasp Nasonia vitripennis has approximately 100 venom proteins, nearly a quarter of which do not have sequence similarity to any other known proteins. My colleagues and I determined the effects of N. vitripennis venom on its host fly, Sarcophaga bullata, using transcriptomes and metabolomes to compare changes in gene expression and metabolites in envenomated hosts to normally developing hosts (Martinson et al. 2014; Mrinalini et al. 2015). We identified previously unknown effects of venom, such as the up-regulation of antimicrobial pathways possibly protecting the host from opportunistic pathogens and proposed mechanisms that underlie known effects. We are currently determining the function of individual venoms through RNAi knockdowns.

Additionally, I have surveyed the venom of pupal ectoparasitoids in the superfamily of Chalcidoidea to evaluate the diversity and evolution of parasitoid venoms. Through transcriptomic and proteomic analyses of the venom gland from ten species of chalcid ectoparasitoids, my colleagues and I have found rapid loss and gain of venom proteins in closely related species. By reconstructing the evolutionary histories of individual genes we can see how novel functions evolve in venom proteins. In contrast to the classic model of creating novel protein functions by gene duplication and neofunctionalization, we have found that co-option of single copy genes from non-venom progenitors is a common mode of acquisition of new venom genes (see video below). We propose that co-option of single copy genes may be a common, but relatively understudied mechanism underlying the evolution of new gene functions, particularly under conditions of rapid evolutionary change (Martinson et al, 2017).

In related work we have identified a N vitripennis venom gene as a lateral gene transfer (LGT). This gene, annotated as an GH19 chitinase, has independently transferred twice from the unicellular pathogen clade Microsporidia/Rozella into all chalcidoid wasps and a single clade of mosquitoes. These transfers double the number of known LGT’s from eukaryotes to insects and provide the first example of an insect LGT from a eukaryotic donor that does not involve the carotenoid synthesis. We also provide evidence via RNAi knockdown that this gene is a functional component of N. vitripennis venom, which -- once injected into the fly host -- induces higher expression of several genes that are part of an immune response to fungi (Martinson et al. 2016). 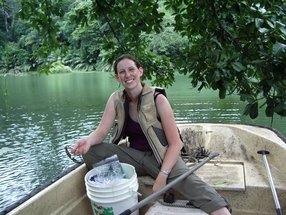 Fig and fig wasp mutualism
The interaction between figs (Ficus spp.) and their pollinating wasps (fig wasps; Chalcidoidea, Hymenoptera) is a classic example of an ancient and apparently stable mutualism. A striking property of this mutualism is that fig wasps consistently oviposit in the inner flowers of the fig syconium (gall flowers, which develop into galls that house developing larvae), but typically do not use the outer ring of flowers (seed flowers, which are pollinated and develop into seeds). My work in graduate school explored the potential differences between gall and seed flowers that might influence oviposition choices, and the unknown mechanisms underlying gall formation. To identify the microbial community that could influence oviposition choice, I identified fungi in both flower types across six species of Ficus. I found that whereas fungal communities differed significantly as a function of developmental stages of syconia and lineages of fig trees, communities did not differ significantly between receptive gall and seed flowers (Martinson et al. 2012). I also examined venom gland morphology in diverse galling wasps from several species of Ficus in lowland Panama, because secretions from the venom gland are thought to be important in gall formation by both pollinating fig wasps and non-pollinating, parasitic wasps. I found that the size of the venom gland was positively associated with egg number across pollinating and non-pollinating fig wasps (Martinson et al 2014). Finally to determine difference in defense and metabolism between gall and seed flowers, and to identify genes involved in galling, I compared gene expression profiles of fig flowers at the time of oviposition choice and early gall development. I found a prominence of flavonoids and defensive genes in both pollinated and receptive gall flowers of Ficus obtusifolia, and revealed detectable differences between gall flowers and seed flowers before oviposition. Several highly expressed genes were also identified that have implications for the mechanism of gall initiation (Martinson et al. 2015). This work explored previously unstudied aspects of the fig and fig wasp mutualism and provided important molecular tools for future study of this iconic and ecologically important association. 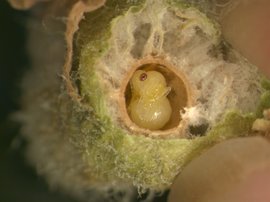 Plant galls formed by insects are among the most bizarre structures produced by interspecific interactions and range from simple tissue swellings to complex structures displaying pigments and defenses novel to the host plant. Insect-induced galls are an extended phenotype where the initiation, development, and maintenance of galls is controlled by the insect, but the gall is composed of plant tissue. Gall induction has evolved independently in six insect orders and has been described for >13,000 insect species. The question of how an organism can manipulate the growth and structure of another organism from a different kingdom of life dates back to scholarly writings in ancient Greece and China. I am interest in understanding how these manipulative interactions evolved, the genes or gene products involved, and whether the regulatory mechanism(s) behind gall induction and development is consistent across independent insect lineages that form galls. Recent advancements in sequencing technologies and assembly algorithms have made employing genome-wide studies of non-model organisms possible in experimental evolutionary studies, therefore we are now poised to uncover the molecular ecology of this complex interspecies relationship. My preliminary transcriptomic survey on the empty oak apple gall of Amphibolips sp. has shown that galled tissues differ markedly in gene expression profiles (20% of total genes have altered expression) relative to normal tissue and can have multiple distinct tissue types. These distinct tissue types show expression differences in genes involved with photosynthesis, RNA modification, and defense, which provides evidence for the plant genes involved in gall formation and development. This work is in collaboration with Scott Egan and Glen Hood at Rice University and Jim Ott at Texas State University.

Mosquito immunity and development
In the Strand lab, I have been able to take advantage of the very well-studied insect model of mosquitoes to investigate how hormones can take on new functions when mosquitoes interact with another organism. For most mosquito species, females depend on the blood from a vertebrate host to produce eggs. In Aedes aegypti, blood feeding induces the release of two hormones from the brain, which activates downstream events that lead to formation of mature eggs. However, blood feeding also can present a pathogen challenge to the mosquito. Previous studies have shown that one of the above hormones, insulin-like peptide 3 (ILP3), has acquired the additional function of stimulating immune cells (hemocytes) to multiply in the hemocoel. I have been working to document the full extent of the immune response to ILP3 and other hormones by injecting hormones into blood-fed, decapitated mosquitoes and looking at the gene expression of immunity pathways in the hemocytes, fat bodies, and guts. I have also been able to address the question of whether the immune response is primarily due to the blood meal or is intrinsically linked to egg maturation across mosquito diversity by measuring the immune response in phylogenetically distant mosquito species that require a blood meal to mature their eggs (anautogenous), never require a blood meal (autogenous), or only require a blood meal after their first clutch of eggs (facultatively-autogenous). We have found that the immune response is only activated with a blood meal and is a conserved response to blood feeding across the mosquito phylogeny (photo: Jena Johnson).